Howard Sykes has demanded the issue of road chaos in Oldham be addressed in response to concerns expressed by local residents. In a letter to the Chief Executive of Oldham Council he says, “The current situation with regard to traffic congestion within the Borough as result of roadwork’s is becoming a major topic of concern amongst the residents of this Borough.
“Of course I recognise that the work related to Metrolink has been a significant factor in the problems related to the town centre, but you will be well aware that we as an administration took the implications of Metrolink very seriously and were constantly seeking improved signage, better communication with the public and of course improvements in the planning of road closures.
“But we have had a number of examples recently where the level of planning and communication with the public have fallen well short of the standards we would have expected and insisted upon – the perfect example being the current Ripponden Road resurfacing works.
“It is taking some people 50-60 minutes to do a simple three mile journey (or less) be it in the morning or in the evening. This cannot be right and the cost to our citizens and the business they work for must be enormous.
“The new labour administration undertook a review of the highways programme that the previous Lib Dem administration approved and, whilst that is their prerogative, the delays built into the system by the review has caused a major concertina effect.
“The whole situation as far as the public, the business community and the politicians is that there is a lack of direction and leadership and that things appear to be spiralling out of control.
“The public of this Borough are appealing in the strongest terms to me and my colleagues to take this by the scruff of the neck, bang some heads together and get the borough moving again.
Howard and the Liberal Democrats will continue to monitor the situation and to lobby for improvement on behalf of local residents and businesses. 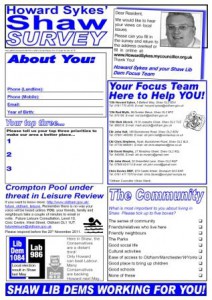 That was the first reaction of Councillor Howard Sykes; Liberal Democrat Leader of the Opposition on Oldham Council, on being told the proposed joint working arrangement between Oldham and Rochdale Council is off.

Councillor Sykes said: “Labour, after only a few months in charge of both Oldham and Rochdale Councils, have failed to do a deal that could have protected front line services while making a significant contribution to the savings both Councils need to make over the next 2-3 years (up to £50 million).”

“I can’t believe that in such a short space of time Labour could have contrived to make such a monumental cock up.  The last Lib Dem administration left a good working relationship between Oldham and Rochdale which could have delivered up to half the total savings both Councils need to find over the next three years.”

Councillor Sykes added: “This was the most obvious and beneficial way to find a huge chunk of the massive savings both Councils needed to make, savings which would have been achieved by sharing management, sharing human resources, reducing duplication, economies of scale etc. The whole package, taken together, would have taken massive pressure off frontline services and jobs.  It was a no brainer and makes you wonder why we did not do it years ago!”

“The people who will pay the price are the staff and the hard working citizens of Oldham and Rochdale,” claimed Councillor Sykes.  “Talk of loss of local democratic control by either council is a smoke screen to hide Labour’s failure.”

He concluded:  “As a result of this incompetence, after only two months in power, Labour are taking us back to the dark days – hundreds and hundreds of additional Oldham Council staff have been condemned to redundancy and a huge strain placed on frontline services to cut costs.”

“It is not an exaggeration to say that this is a very bad day for Oldham Council, its staff and the citizens of this borough”